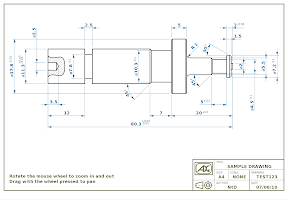 The ADG library (Automatic Drawing Generation) is a set of functions focused on automating the drawing of mechanical parts.

It is not a CAD system but a software library providing a non-interactive canvas where a custom application can put common CAD entities such as paths, hatches and dimensions, to automatically create technical drawings.

When different parts share a similar shape, a custom application can be much more effective than the traditional way of manually drawing every part with a CAD. In some production factories, such as the automotive sector, this is quite common. Nozzles, elements, nuts, valves, needles and a lot of other parts fall into this category.

You can reach similar targets by using parametric CADs, but a custom application provides the following benefits:

Although ADG is developed in C using an object-oriented approach, the applications based on it are expected to be developed using higher-level languages and especially garbage-collected ones.

Its components (such as model handling, user interface support and drawing customization) are fully decoupled, making possible for instance to build the project on a headless server for web applications support. Check out the Technical details page for further information.

The project is cross-platform. It is known to build on various flavour of GNU/Linux systems (Archlinux, Slackware and Ubuntu), FreeBSD, OpenSolaris and Windows XP (either by cross-compiling from GNU/Linux systems or by natively building it on a MinGW environment).