The ADG development started in 2007 but the idea of automatically generate technical drawings from a bunch of data can be dated back to the mid-nineties. At that time I was employed as a technician in a manufacturing center producing nozzles. A good amount of time was dedicated to using a CAD software for generating the technical drawings required by the different departments.

These drawings were mostly the same and, although I initially tried to use the CAD for every single drawing, I ended up (as my predecessors) with whiteout and pencils. Using the CAD software was simply too time consuming and the process of looking for a similar nozzle, open every drawing of that part, stretch the wires, adjust the quotes and check the final result was (by far) too error prone. 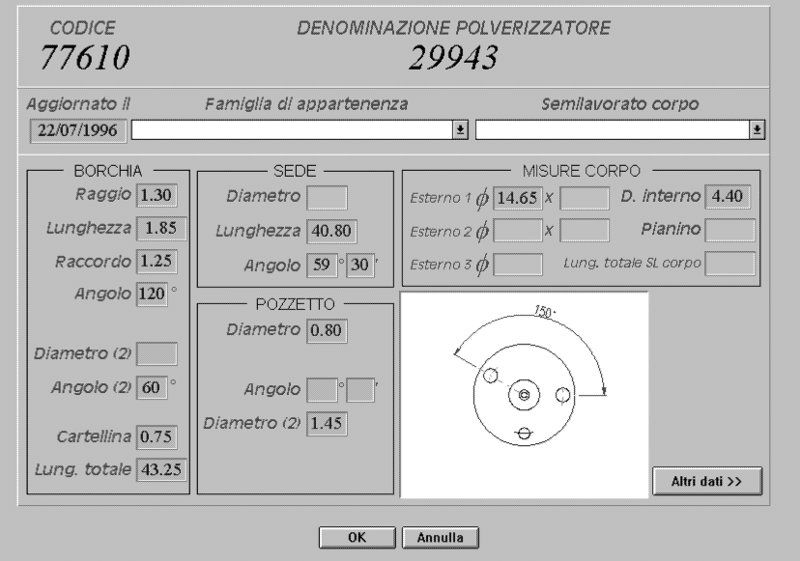 This was the first (and technically successful) attempt in resolving the drawing problem. Today it is still used in only one installation because it has been superseded by a more recent rewrite from scratch that used the same approach but with more up to date tools (that is, the father).

The software is monolithic and developed with Superbase 95, a RAD database very similar in use and scope to Microsoft Access. The choice was made not for technical reasons but because Superbase was already used internally, hence it was immediately available.

Big chunks of the code were devoted to the definition of tables and forms for handling the interaction with the user. The overall structure strictly followed the needs of the moment and the production procedures to minimize the impact of the software on the real world. Even the grouping of the data followed the mechanical machinings performed on the parts.

To speed up the input of ecpected (for a single part there were about 300 values required) a family approach was used, that is a set of values identified by metadata that allowed to automatically fill up whole forms. 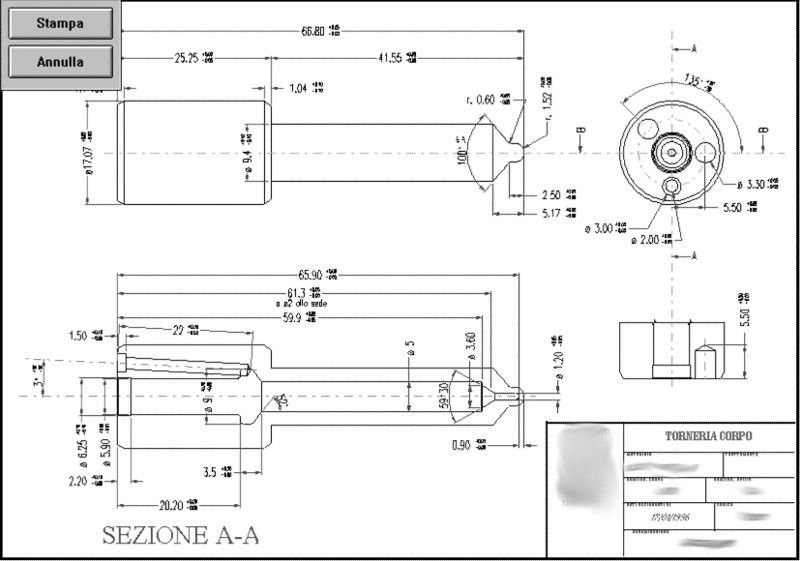 The drawing was generated in DXF format using the text file manipulation APIs provided by the Superbase scripting language. The resulting file was then imported in the user interface through the DXF filter (technically a DLL library) installed as an option by the database installer. After the import, the drawing was shown on the screen, ready to be printed.

Every generation cycle required about 5 seconds. The DXF files were stored in a dedicated directory: this allowed to reopen the generated drawing with a CAD software to modify it in a second time, for instance to add an unusual machining not planned in the drawing application.

Once the data was stored in the database, SQL queries can be performed on them, allowing to executing interesting operations on that set of data. For example, I got a list of nozzles with a specific diameter or with a particular tip in seconds instead of hours, and minimizing the risk of errors. Furthermore I standardized some quotes to reduce the setup time and increase the productivity by running a serie of planned UPDATE queries.

Another (not so) hidden advantage of this approach is that a single data set can generate more than one drawing. In this specific application 7 drawings were generated, following the requirements advanced by the production lines and by the sales department. For example a special drawing table was generated fot the drilling machines that included some metadata and a dedicated table directly filled with the data the operator should insert into the machines.

In the form used for inserting the drilling data was present a special command that connected the application with an external equipment used to acquire the holes angles. This allowed to get the values of the angles directly from that devices instead of typing them with the keyboard. The communication was done by using the Hitachi H-Series protocol over a serial line between the PC and the PLC of the external equipment.

When the need to update the PC arose, the limits of the platform chosen came to light. It was clear Superbase was not a winning choice and the DXF filter, a requirement for this kind of applications, was no more included in the installer. The rate of adoption of Microsoft Access over Superbase was an order of magnitude faster so it has been decided to rewrite the software from scratch using Microsoft Access 2000. That database has an (optional) DXF filter included in the installer. I must add to my defense that I wanted to use more professional tools for the job (such as using web technologies on a LAMP platform) but money constraints and scepticism got in the way, so I have been forced to use Access.

Although the scripting language and the overall design were quite similars, this job required quite a big amount of time because the details, such as forms and UI signal handling, were totally differents. The scripting language was VBA (VisualBasic for Application, that is VisualBasic 6 embedded). Although inadecuate for large projects (e.g. its idea of object oriented is, mildly put, laughable), the operations to do were quite basics so it has been proved good enough for that job.

Everything has been rewritten from the ground up but the interaction of the application with the equipment for acquiring holes angles. This would have required the port of the Hitachi protocol to the new platform but non-technical issues once again interfered with the application development.

The experience acquired while implementing the previous applications and the fact I wanted to prove using a LAMP platform was technically superior in every aspect brought me to the development of the ADG.

These are the main issues I encountered, roughly in (my subjective) order of importance.

In the design of the ADG I tried to address every item.

The only missing thing I see in the current implementation (and this can be a big one, depending on your requirements) it is the missing support to the DXF format.